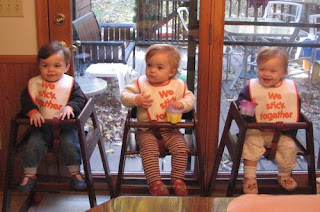 After waiting for more than a month, we finally got the triplets' new high chairs. We like these much better than their old ones, as these fit much better at the table. I then started carving their Halloween pumpkins, and Arthur was quite interested in the inside of them. 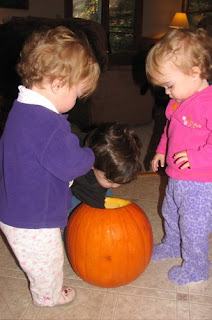 And then Arthur, in an abrupt 180 degree shift from his previous behavior towards his sisters (namely biting and pushing), started giving Betty kisses on the mouth. We were a bit concerned that we were encouraging the behavior, as we snapped pictures and took video, but after a dozen or so kisses Betty started shaking her head "No." So luckily the "No means no" conversation ended it, or Coraline would have been singing "Arthur and Betty, sitting in a tree...."

Oh that is sooooo adorable. I can't wait till they show each other affection like that.

That is so sweet! I keep wondering if the boys will do that, seeing that Connor likes to kiss his reflection...