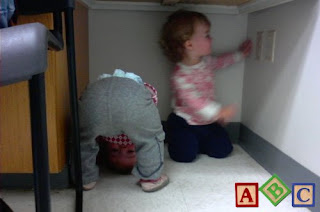 We took the kids back to the doctor's office today, as we were fairly certain that the girls' ear infections had cleared up. Thankfully they were all healthy (and the doctor didn't mind Coraline's runny nose), so they could finally get their 15-month shots, and the first dose of the flu vaccine. With nine shots coming between the three of them, we didn't blame the kids when they started hiding underneath the counter in the room (Coraline hoped having the blood rush to her head would dull the pain of the shots). Anyways, after waiting an hour and a half in the doctor's office, and nine shots later, we were finally done. And in the process of all the children screaming, we happened to see that Arthur had gotten his first molar. 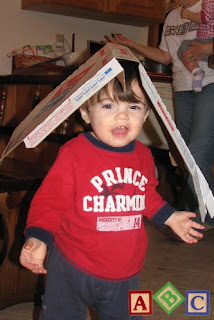 And so after a rough day at the doctor's office, we tried to relax tonight with some pizza.

I cant believe you had to wait that long with the triplets. They always get me in and out right away at our doctors...I can't imagine having to wait. It is hard enough as it is. I dont look forward to their 15 month shots. We did the flu shot as well.

Yeah, it was a long wait. They don't start getting the shots ready until after the doctor sees us, and evidently it takes a while at this office. So to keep the kids busy, we played "shred the paper liner." They put a whole roll in the room, so evidently they were prepared for us. :) So once the floor was covered in paper, the nurses came in with the needles, and I bet they won't keep us waiting that long next time :)