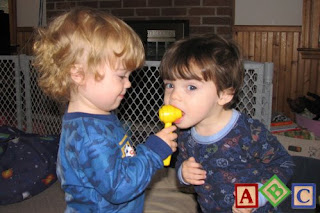 Arthur finally got in a new tooth today! It has been a few months since anyone had gotten any new teeth (and the girls have had a full set for even longer). We almost were convinced that Arthur would only have three front teeth on the top, but we became suspicious as Arthur drooled more and more over the past few days. Today, as he was chewing on his dolly, I peeked in, and sure enough his last incisor (on the right) had just cut through his gums. Betty tried to see it using otoscope Aunt Heather sent them in a Fisher Price medical kit (to help the kids practice for their big visit next month to a pediatric urologist in North Carolina), but I don't think Betty was able to see anything.