Coraline's Day at the Hospital 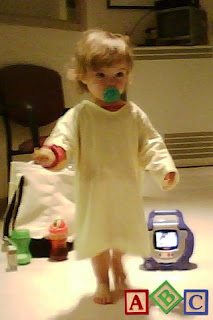 It turns out Coraline's UTI last month was abnormal. First, girls her age shouldn't be getting them, and second, the culture showed that she had a very severe infection. After consulting with three different pediatricians at our office, we decided to take Coraline in for further testing. This wasn't a prospect we looked forward to, as the two prior catheterizations caused Coraline to dread the doctor's office. 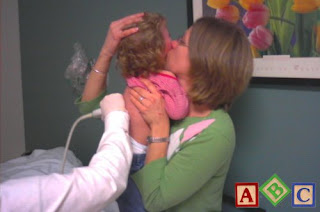 So today's visit did not go very well at all. She screamed horrendously during her ultrasound, which is a painless procedure. Her kidneys, though, looked fine. We then took her to radiology for a VCUG. This was more uncomfortable, but Coraline had worn herself out for the most part by this time. (Though we noticed her face was covered in "freckles" from bursting capillaries from screaming so hard) 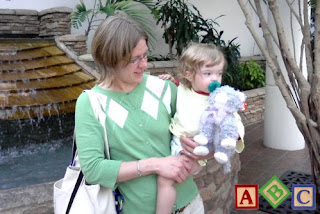 This test revealed that there was indeed a problem. She has a high-grade reflux between her bladder and left kidney, and a low-grade reflux on her right side. This is coupled with the fact that she wasn't voiding her bladder completely, as we experienced after waiting two hours in the radiology lab for her to relieve herself. We don't know what the next step is, but it seems the choices are to prescribe medicine to prevent further infections and hope her body grows out of it, or to surgically correct the angle of her ureters. We were glad to be done with today's tests, and Coraline got a "Hospital Kitty" from the gift shop to comfort her.
Posted by ABC Triplets at 8:52 PM