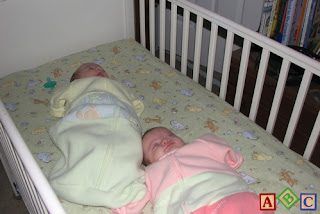 For the past few nights, the triplets have actually been sleeping in their cribs! Previously, we had carried them up to bed in their bouncy chairs. Recently though, the girls had not been as easy to put down in their chairs, and Arthur has been requiring more than half an hour of rocking in his before falling asleep. So we decided to bring the crib over from our house. Surprisingly, it turns out that all three can't fit in the crib anymore (we only had tried it the first few days home from the hospital). So the girls have their own crib, and we have Arthur in a separate smaller crib. 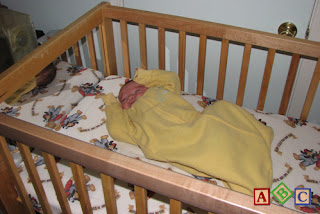 Miraculously, they all love the cribs, and have so far (knock on wood) fallen asleep almost instantly upon being set down in them. Arthur luckily has his own crib, as he flails around quite a bit. He rocks to the left, then to the right, arches his back, arches his neck, stretches his arms way out, all in an effort to find the exact softest spot in the bed. We think it's cute, but when he's older and climbing into our bed, he's going to his mom's side.
Posted by ABC Triplets at 10:31 AM