Well after weeks and weeks of badgering the human resources department of Erin's school, they finally called this morning at 7:40am to let Erin know that she needs to be at an orientation that starts at 10am. The plan was for Erin to take over for a woman going on a 12 week maternity leave who taught essentially the same subjects Erin taught before the boy's school and the girl's school merged this summer. That was six weeks ago. The lack of communication between the school's administration, the HR office, and the corporate office, was so extreme that they literally gave her two hours notice to start the position. I am not sure how they could expect this of a normal employee, let alone one that has triplets! 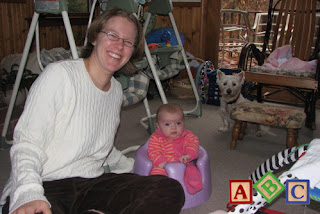 So Erin is spending this week going through orientation and training again. New school, new system. Today she filled out tons of paperwork, and was shocked to see that on the Virginia tax forms, rather than claiming a 0 or a 1 (as in previous years), Erin had to claim a 12! She even called over the woman in charge to go over the figures to make sure this was right! On the home-front, the triplets survived a day without their mom, though Nana was a bit worn out from the experience. Send us an email if anyone wants to get in on the pool we are starting to see which of us cracks up first from the stress. :)
Posted by ABC Triplets at 6:39 AM