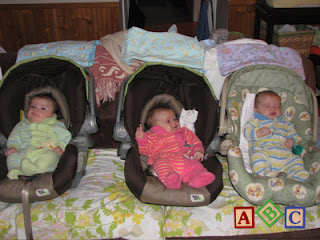 Today we left the triplets with Nana and Pop Pop for three hours, while we went and reapplied for our old teaching jobs. While Erin was on disability/maternity leave, the school was bought out and moved - instead of being within walking distance, it is now a 30-minute drive. The interview went great, and the school looks like it will function more smoothly under the new management. Erin will be starting up again at the beginning of November, as a 12-week substitute for another science teacher who is having a baby (just one though). We're not quite sure how we'll handle the triplet situation with Erin away during the day, but we guess someone should probably be earning something in this family.

Some of the kids at the school asked Erin if she was pregnant, and proceeded to ask some follow up questions - "You had three babies in your belly?" "*He* put three babies in there?" "Did it hurt like hell when they came out your $#%@?" (Ah, the emotionally disturbed, at-risk teenagers of Virginia sure know how to turn a phrase).

We returned though from this outing to find my parents in baby shock. This is a condition that arises when you are outnumbered by babies, and is usually preceded by all three triplets crying at once. Luckily we were able to relieve them in time before the condition became permanant.

In other news, we're hoping the triplets' cousins don't have to be evacuated from the fires in California.
Posted by ABC Triplets at 5:26 AM

You have such a beautiful family! Your littes ones are just so cute!

Best of luck with your new teaching position, I hope all goes well with the transition of being at home to working.

Thank you for your prayers for my Jordan, he is doing great now.

I am in VA too!
Kelli (www.theratliffboys.blogspot.com)