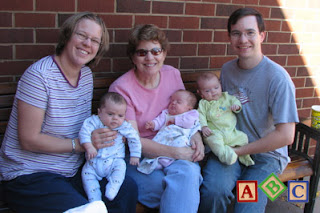 Today we took the triplets to the 6th Annual Apple Dumpling Festival in the small town of Stuart. The festival was only 40 miles south of us, but the drive ended up being 70 minutes in length, due to the fact that the roads wound around the foothills of the Appalachian mountains. The drive was very scenic, with the leaves just starting to change around us. However, we were interested in seeing how Stuart’s festival compared to our more local town fairs in Blacksburg and Christiansburg.

Was the highlight the variety of crafts and home-made goods? Not if you didn’t truly appreciate crocheted Dale Earnhardt pillows. Was it the local country music? Not if you didn’t bring earmuffs to muffle the speakers. Was it surely the apple dumplings, which must have drawn the moderate crowd out of their homes? It might have been, but the ice cream had run out, and the dumplings soon followed, so we couldn’t tell. In fact, it was none of these. The highlight of the town festival was a set of triplets brought in by some out-of-towners.

We couldn’t make it two feet with the stroller before a crowd formed around us. We’d answer questions, give them a peek at the babies, and try to move forward away from them, only to get ambushed a few feet later. This was nothing like we had ever experienced before. Sure, we got attention at home, but it was more respectful, courteous, and from a distance. Perhaps it was because we live in one of the largest towns in Virginia. Here in tiny Stuart, population 964, we were an attraction people would talk about for years to come.

We had women bringing their children over to see the triplets, men counting out loud as they passed us (“One,” “Two,” “Three,” attesting to the strong school system in the area), old ladies sneaking up unannounced to peer their heads into one of the carseats. Another woman started clapping as we passed by. Was she really applauding my ability to procreate? Is that rude? Should I be proud? Unsure of what to say, we kept going.

One elderly woman came by at least a half dozen times, each time adding another comment or anecdote. Nana and Erin thought she was senile, and kept forgetting she had seen us before. Needless to say, we were all quite exhausted from the outing, and looked forward to the serpentine drive home.
Posted by ABC Triplets at 8:38 PM

Just wanted to say hello! I found you through a comment on a triplet friends weblog and thought I would drop in and say Hello!
I too am a VA MOM! I've got BBB triplets 28 mos, and GG twins 15 mos. We live out in the Shenandoah Valley, so it sounds like I'm pretty far from you...
Just saying hi! Your babies are beautiful! :)