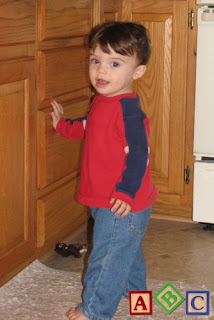 This week Arthur has finally managed to defeat the childproofing on the kitchen drawers at Nana and Pop Pop's house. He carefully opens the drawers a bit, deliberately puts one finger on the safety latch, and disengages it. He then proceeds to empty the drawers so that he can climbs into them. Already he has almost broken the bottom drawer (we managed to bend the track back into shape). Efforts to prop the latch are also unsuccessful. So instead we've decided that we're going to teach Arthur the word "No." At the moment, all Arthur has learned is to point at the drawers and mimic us saying "Ah-Ah-Ah," before smiling and opening the drawer anyways.
Posted by ABC Triplets at 3:51 PM