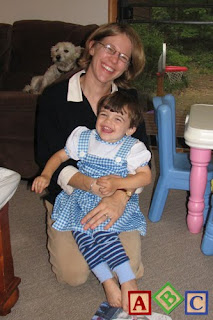 We didn't originally plan to raise Arthur and the girls differently. We thought that if Arthur played with dolls, and Betty liked trucks, that'd be fine, and we wouldn't limit their interests. However, we have found that there are some inherent differences between the sexes, as defined by biology and society. So we've slowly been working on the difference between boys and girls. First and foremost, we learned that we need to teach them that only boys can pee on trees. It still has yet to sink in. To make things even, though, we've told Arthur that peeing on trees is a boy thing, and wearing dresses is a girl thing. It still doesn't stop him from wanting to try on new outfits (he knew this Halloween costume was a girl dress, and frankly, he's the only one of the three that didn't complain about it being too tight).
Posted by ABC Triplets at 11:51 AM