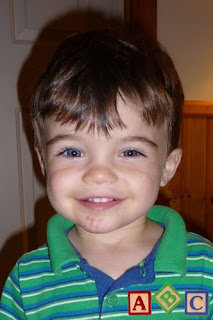 The day we've long anticipated finally has arrived. Arthur climbed out of his crib last night. We actually had thought he'd do it last year, but for some reason the thought never crossed his mind. So after a loud thump, and a shrieking cry, we ran up to find Arthur on the ground, his lip bitten, and three large rugburn marks across his chin (which he landed on). After calming him down, we put him back in his crib. A few hours later he was out again, and a few hours after that, I caught him in the act of swinging his leg over the crib railing. So it was time to set up his toddler bed. The plan had been to put all three toddler beds in the same room, but we had hoped it wouldn't be for a few more months. 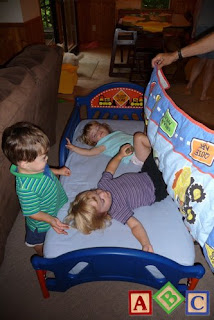 Here's Arthur's new bed in the girls room, in front of a large wrap-around mural of the New River Valley that I've been slowly working on. I had hoped to finish it before moving all three of them into the room, but Arthur had other ideas. We'll see how long it takes the girls to start begging for their toddler beds. 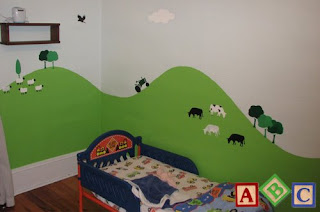 Poor guy! He's got a rug burn goatee! The mural in their room is so amazing! I just love the colors. What more were you planning on adding to it?

Well, a big red barn needs to go just to the right of this photo, and I think a shed is going on the left there. On the opposite wall is going to be a large train going over a river, and there'll be a duck pond by the door. Today I'm working on painting a sun and a pair of silos.