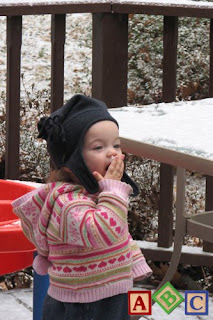 Today was a day of big events. It started with a surprise - a light snowfall! Betty thought there was just enough for a light snack.
Our first change to our routine came when we decided to try consolidating the triplets' naps. Instead of having two 1-2hr naps (9am and 1pm), we tried just having a single naptime at 11:30. It's still a little early to tell if it is going to work out, but as the kids have started sleeping 12hrs at night (instead of 10.5hrs, we think they are ready for a daytime change as well. 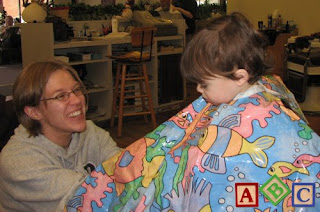 Then in the afternoon we had our second big event. After trimming Arthur's hair a few times ourselves, we decided to let the professionals give it a try, and we took Arthur to his first big-boy haircut. He was fascinated at first with all the activities going on in the barbershop, and the mess of hair on the floor.

It went as well as can be expected, but there was a lot of crying (he didn't like the scissors, but was fine for the electric trimmer). The hairdresser was very patient though, and we think it turned out well in the end. 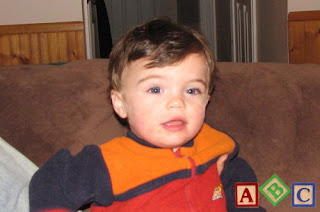 I love the haircut! Our boys just both got theirs cut today, too.