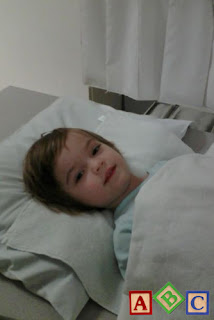 Today we took Coraline to the doctor's for a follow up to her urinary reflux diagnosis last year. For the past year she's been taking a low-dose antibiotic as a preventative. She doesn't like it, and eventually through such a fit over having to take the liquid medicine every day, that we switched to a pill. For some reason, she liked the change, and was able to take a pill with a glass of water (followed by an m&m). So we took her in for some xrays, and were quite pleased to find that she had outgrown her condition. Coraline was thrilled that she doesn't have to take her medicine anymore, that is, until she realized that she wouldn't be getting an m&m anymore either.
Posted by ABC Triplets at 10:31 AM