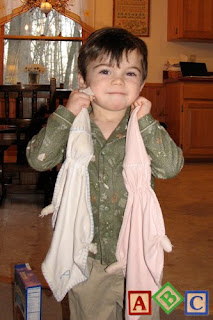 These are Arthur's dollies. When the kids were babies, Aunt Heather made three dollies for each of the kids. Two pink ones, and one white one, each with their initial monogramed on it. Coraline and Betty never quite became attached to it, but Arthur has loved them since day one, and adopted all three as his own. At night he sleeps with two of them in his bed, and uses the third at Nana and Pop Pop's house for nap time. 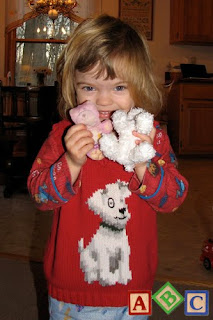 This is Coraline's little bear, and little dog. Little bear actually used to belong to Aunt Emily when she was a kid. Though Coraline is slowly growing apart from these two dolls, there was many a time we had to tear apart the house looking for them, so that Coraline could sleep with her little bear. 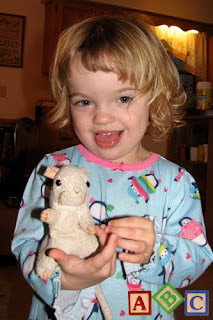 This is Betty's mousey. She carries him with her everywhere, and sleeps with him every night. We try to keep him white, so we've started encouraging Betty to put him someplace safe when she eats meals, or when she goes outside. But often at the end of the day, mousey needs a bath.
Posted by ABC Triplets at 9:50 AM